With recent developments and the continued backing of an active class association, the GP14 remains one of the UK’s most popular sailing dinghies for close, competitive tactical fleet racing.

The GP14 is used for all levels of sailing, from training beginners through club racing to competing at regional, national and world events. As a relatively stable boat it is ideal to learn to sail in and is sailed by people of all ages and abilities. For competitive racing there is a wide tolerance of all-up crew weight.

Originally designed by Jack Holt in 1949, the GP14 is easily recognised by the distinctive bell on the mainsail. This is thought to be either a reference to the legendary bells of Aberdyfi, North Wales, where Jack Holt is alleged to have designed the GP14 or, perhaps more likely, it relates to the original manufacturer Bell Woodworking.

The idea behind the design was to build a general purpose (GP), 14-foot dinghy which could be raced, cruised, rowed or to which you could even attach an outboard motor if you wanted to! Nowadays, you are most likely to see the GP14 being used to race competitively, training people to sail or occasionally just enjoying a casual cruise around a lake, estuary or coastline.

Link to more information on the GP14

The 5O5 is a double-handed boat that incorporates a light weight, high performance hull design with a powerful sail plan and one trapeze. The boat is unique in that it has outstanding performance in all conditions. In light air it is quick and responsive, and in breeze it just goes faster. Planing begins in 10 knots of wind.

The Class Rules are One-Design, with the emphasis on controlling aspects that most directly affect boat speed. The sail plan and hull shape are tightly controlled, while the rigging layout, spars, and the foils are open. This allows the boat to be set up in many ways to suit the sailors; there are several distinct types of sail and layout combinations from the US, Australia and Europe. The result is that, at any Worlds, all the types will be used by the top 10 finishers, and usually by the top 5. Most US boats currently have adjustable shrouds, forestay, and mast ram, which allows rig tension, rake and bend to be changed while racing. There are many ways to rig the boat; it still takes the best sailors to win.

Hulls are built of either fibreglass/polyester or of epoxy resin/Kevlar and honeycomb composite. Both types are equally competitive when new, but twelve year old epoxy composite boats can still win major championships.

Link to more information on the 505

The 420 is an established worldwide performance two-person trapeze and spinnaker racing dinghy which holds status as a World Sailing International Class.

There are 56,000 boats which have been built worldwide. This popular dinghy is sailed at school, club, open, national and international levels. There are many second hand boats available, active clubs and excellent tuition for all levels.

Built in buoyancy tanks make the boat very safe even when inverted. The 420 is the youth development boat in 43 countries around the world. It is the equipment for the two-person dinghy boys and two-person dinghy girls events at the Youth Sailing World Championships, the pinnacle youth event in the world.

Despite the emergence of newer commercial driven classes and asymmetrics, the 420 is still the world’s top youth training boat.

Link to more information on the 420 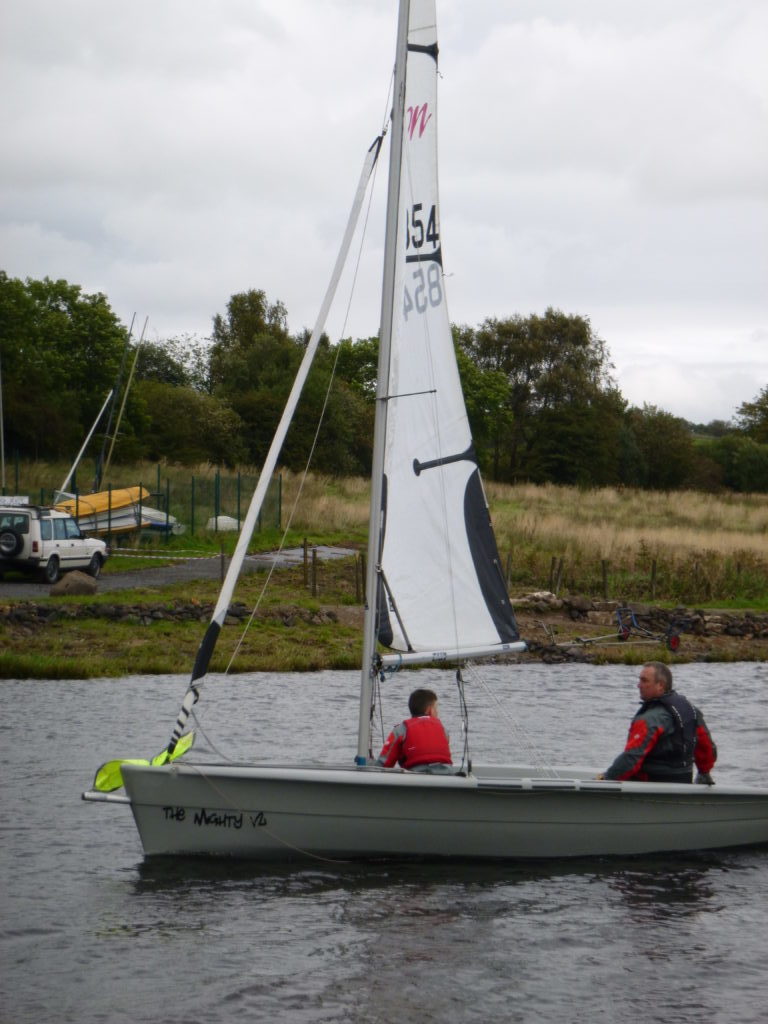 The RS Vision is a boat that is tough and virtually maintenance free. It is roomy, stable and great to sail.  The RS Vision provides sparkling performance, a fully self draining cockpit and a multitude of specific accessories.

Link to more information on the RS Vision

The Laser is the most popular sailing dinghy that has ever been produced. There are now over 200,000 boats world-wide. At the highest level it is an Olympic class for single handed men and women and the UK has a very good standing within the world. Ben Ainslie and Paul Goodison have both achieved gold at Olympic level. Several ex Laser sailors have also won gold in other classes such as Iain Percy, Shirley Robertson, Sarah Ayton, and Sarah Webb. Both 2016 Olympic representatives, Nick Thompson and Ali Young are current (2016) Laser World Champions and several of the other 2016 Olympic representatives in other classes have transitioned through Laser.

Link to more information on the Laser

The world’s leading double handed dinghy for youngsters and parent / child teams. An International Class with events around the globe, the RS Feva is fast-growing in most developed sailing nations and expanding into others every year. Chosen by families, clubs and National Authorities to build the pathway to a lifetime in sailing – the RS Feva offers a double-handed alternative and a stepping stone at the crucial time in sailing lives. Exciting performance is the secret behind the success. Modern styling and practical features make it irresistible. We couldn’t be more proud of the RS Feva’s achievements for thousands of sailors and for the sport.

Link to more information on the RS Feva

The Laser Pico Boat is a small family boat. It is a fun, durable, confidence-inspiring, rotomolded boat that can be sailed by everyone. It’s ideal for entry-level sailors and is equipped with a removable jib and reefing main sail for easy rigging.

Link to more information on the Laser Pico